by Carollynn 7 July 2014
in halloween

I have a confession to make.

It’s the middle of summer; the summer I dreamt of all long winter long, but now, all I can think about is Halloween. That’s not the confession, though… Are you ready?

I , no, I LOVE horror movies, and haunted houses, ghost stories and the idea of things that go bump in the night.

My friends would tell you it’s one of my defining characteristics. I love this stuff almost as much as I love my husband, my two GRRR girls and as much, if not more, than decorating.

Yes, you read that right.

Yes, I love horror and Halloween THAT much.

There I said it. Does this make me a freak in your eyes?

If yes, that’s okay, I’m quite fine with that label.

My affection for the dark side may make you a little squeamish, but I think moving out of one’s comfort zone is a GOOD thing. Which means watching rom-coms is totally outside my comfort zone and makes me SQUEAMISH inside.

Songs My Mother Sang to Me

It all started innocently enough — my amazing mother was the catalyst for this life long love affair with horror stories. One of the early childhood songs she sang to me was “ The Hearse Song”, source: Wikipedia

“Don’t you ever laugh as the hearse goes by,
For you may be the next one to die.
They wrap you up in a big white sheet
From your head down to your feet.
They put you in a big black box
And cover you up with dirt and rocks.
All goes well for about a week,
Until your coffin begins to leak.
The worms crawl in, the worms crawl out,
The worms play pinochle in your snout,
They eat your eyes, they eat your nose,
They eat the jelly between your toes.
A big green worm with rolling eyes
Crawls in your stomach and out your eyes.
Your stomach turns a slimy green,
And pus pours out like whipping cream.
You’ll spread it on a slice of bread,
And this is what you eat when you are dead.”

Yes, as an infant and toddler, my mother sang me to sleep with this song…and I loved it.

What stuck with me is this part, and it seems I am not alone:

To this day, those lines still make me giggle.

Then there was her predilection for Bela Lugosi vampire movies. We watched them and the 1970’s vampire soap opera Dark Shadows whenever it was on.

The Addams Family – I identified with these folks

Afternoons, my favorite shows were the Addams Family and The Munsters. 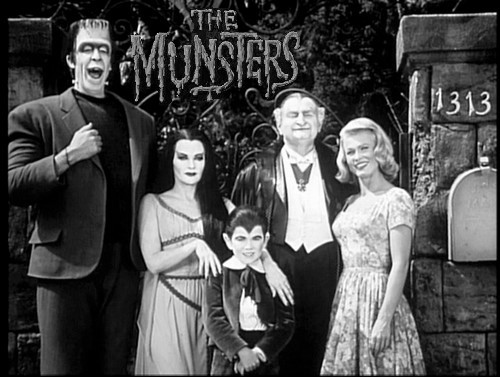 The Munsters, a wholesome American Family

You can see I came by my love of horror honestly. How and why mom became enamored will always remain a mystery to me. Unless I can get her spirit to talk to me someday…

My Kind of Horror

So what do I love about horror and why? Psychiatrists say that folks who like horror stories and movies do so because it’s a safe way to experience danger, and there is an adrenaline rush when one is scared. True dat! I also believe, deep down in my lapsed Catholic heart, that there are many unexplainable things between heaven and hell, and I’ve experienced some of them.

I also really don’t like gory, bloody stuff either. This came very much into focus a few years back when I took Tim to the emergency room for some stitches and almost passed out when they started to work on his injury. Gratuitous gut spewing will make me turn the channel faster than you can say EWWWW.

The Conjuring, a recent favorite

You might call me a horror purist in a sense – I like a good old fashioned demonic possession story (my favorite movie to this day remains the Exorcist), the romantic in me gets hot under the collar for the vampires, ghosts are a sweet spot, witches, god love ‘em are so crafty and every once in a while, I like a little bit of werewolf thrown in for good measure. Zombies, meh, I can take ‘em or leave ‘em. The entertainment the value I derive depends on how well the story is told. Is it complete? Plausible? –yes, I know, many horror stories aren’t plausible at all, but that’s also the fun of it.

On average, I watch at least one horror movie/tv show a week and am almost always in the middle of reading a horror story. With this steady diet of horror, I do find it hard to work up a good case of the heebie-jeebies. I do have a test, though, on whether or not what I’ve watched or read ranks highly on the scare-o-meter:

Typically, I watch the scary movies on the TV in the den.

If I’m truly scared, after the show ends, I go through the house and turn on all the lights in a direct path to the bedroom. Everyone knows there’s no danger in the light.

So I’m all about that pathway of protective light, ensuring there isn’t anything lurking, waiting to jump out and grab me.

And in the past, there HAVE BEEN things waiting in the dark – my own reflection, Tim, the dogs…

and when I was just a wee one, my mom, who purposefully stood in a darkened doorway, waiting to pounce.

I’ve proven enough times that I’m a good screamer, and susceptible to startle scares. So, yes, I create a path of light.

Once that lighted path has been established, I then go back and turn lights off behind me as I make my way to the way to the bedroom.

This is where it gets tricky and a little exciting.

The adrenaline is now pumping – as I prepare to turn off the lights, I get into a runners stance: preparing to simultaneously flip the lights off AND launching myself the five feet between the bed and the door, sailing over any and all lurking demons/vampires/ghosts or witches that might grab me and drag me under the bed into hell. And then I clutch Tim for dear life until I fall asleep.

If I go through all that, the show/movie/story was REALLY good. It happens about one a year or so these days. When I was younger, it happened a lot more frequently.

So what guilty pleasure might you want to confess? Do you like the horror genre of books, TV and movies? What gives you the heebie-jeebies?

This site uses Akismet to reduce spam. Learn how your comment data is processed.

Previous post: 9 Reasons Why I love the 4th of July

So glad you dropped by

Hey Y'all, I'm Carollynn and this blog is about creating my personal design gumbo.

Blogs I Read Each Day